I liked the look of the white walls and semi-reflective surfaces, so I shot half a roll of 35mm film. The result — a mini 'photo series'. 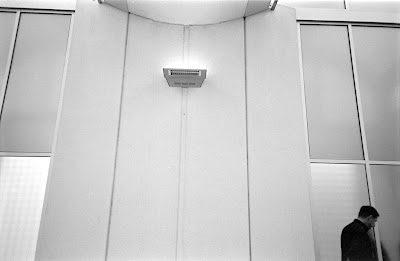 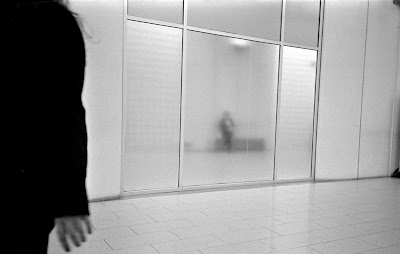 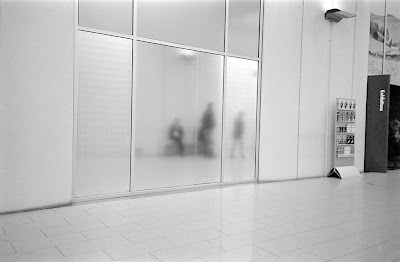 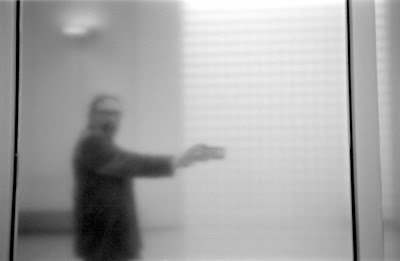 I don't have a lot a lot to say about these. There is a glimmer of the silver world I have been searching for. An alternate reality.

There's a kind of Escher visual paradox in the first image, where the man on the right appears to be merging into the wall (in fact, it is the merged images of two people, one of them reflected).

The fourth image (the 'selfie') is in focus, if you look closely. Probably not apparent in the photograph is the fact that the image is reversed. (A clue is that I am holding my camera, a Leica Mini 3 point-and-shoot, in my right hand.)

The negative was causing Newton's rings in the film scanner so I had to reverse the film in the negative carrier, keeping the shiny side away from the lamp. I originally intended to reverse the image back in Photoshop but, somehow, this looks better as it is. The viewer is looking 'out' from the semi-reflective surface.

Posted by Geoffrey Klempner at 9:44 AM No comments:

Today, in Metaphysical Journal, I wrote:


I want to understand.

That is why I am here. To puzzle it out, put the pieces together.

— The metaphysician in me, I suppose.


The penny dropped five minutes or less after I clicked 'Post'.

Photographs are the jig-saw pieces: 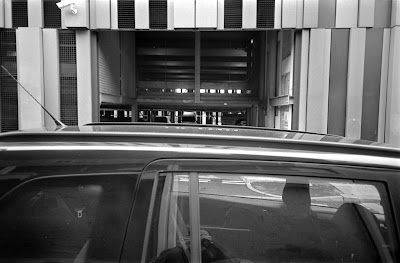 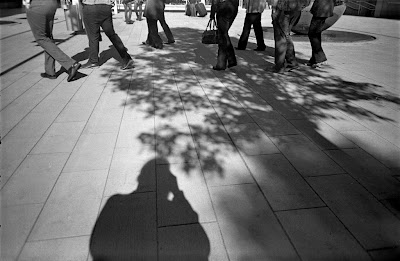 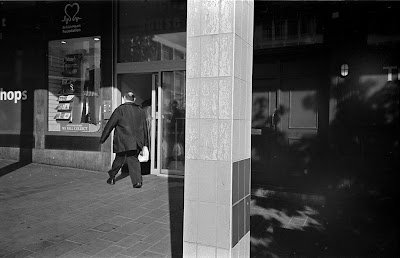 I see now how this can become an all-consuming obsession (as it was for Gary Winogrand, but he's just one of many 'great', i.e. obsessed, committed, photographers).

Putting photographs together cannot solve any problem, not literally. Maybe, at some level, as 'art' (which I deprecated in Metaphysics of the Photograph) photographs in sequence can 'show' something that an individual image cannot.

I agree, in principle, that you judge a photographer by a body of work, rather than individual works, that individual images are not meant, intended to make whatever statement they make in isolation, in the way that a painting — say, by Picasso, or Jackson Pollock — can do. You can write an essay on Pollock, concentrating on just one image. You can't do that with a photograph. (Well, you can, but it would be false, contrived.)

This is where things get philosophical. Richard Wollheim in his book F.H. Bradley comments that the metaphysical impulse towards 'putting things together' has a Kleinian explanation: restoring 'whole objects', reacting to the split between good/ bad objects, the child's fear of his/ her destructive impulses.

'Puzzle out reality' is what I tried to do, in different, but then again not so different ways, as a would-be metaphysician and as a photographer.

How can photographs do this? I'm not entirely sure. Why did I select the three, above? Because they 'said' something other than the merely literal. They have the required ambiguity, which is at the same time a potential capacity for meaning.


Posted by Geoffrey Klempner at 7:15 PM No comments:

Although in many ways this is way too early, I started an account at Saatchi Art and posted three images there: 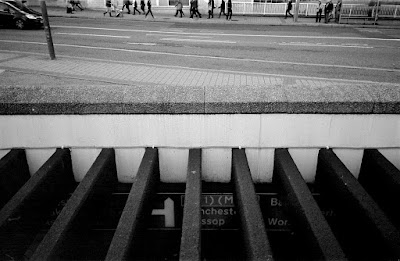 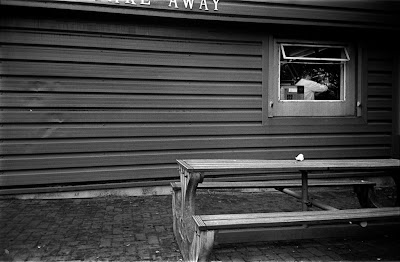 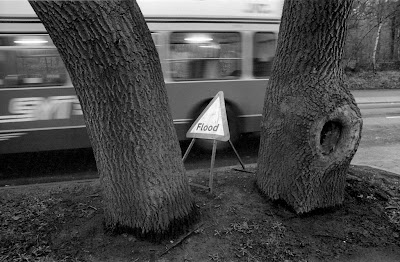 You can order prints from Saatchi Art, the cheapest is $99. Saatchi take just 30% of the profit from sales of prints, and the artist gets 70%. This is the same ratio as their sales of original works by artists registered with them. The only difference is that, when Saatchi make the prints, they deduct the cost of production, postage, etc.

However, the files I uploaded are identical to those posted on Flickr, so you can print them yourself for free. (You will need a good A3 inkjet printer, a Canon or an Epson. I don't own one.)

It was an interesting exercise to see which images I would choose, if I had to make the choice. Which images are worthy of being hung up on a wall above the sofa, or TV, or dining table. By my lights, of course.

One of these, 'Flood Alert' also appears in my Metaphysical Journal post on Philosophy and photography. Here's the explanation I gave:


There is a flood. But not here, the road is dry. Where, then? The empty bus: is it speeding towards the flood, or away from it? And those trees, or tree trunks. Photographs of trees are one of the staples of photographic 'art' — pictorialism, the celebration of 'nature'. But, here, the trees seem to have a different meaning. More sinister. Was the flood caused by nature, perhaps a heavy rain storm, or a burst water main? Either way, floods are something to fear. But these trees will not be affected in any way. They will stand by, immobile, while human beings flounder and drown.

Note that this isn't an explanation/ justification for why I think it is a 'good' picture, but rather why (I claim) it 'says something' — in the way that a photograph (or the kind of photograph I look for) should do.

A similar story could be told about the other two images. I leave it to the reader's imagination. What is being 'said' is not said literally, so there are multiple stories you can tell. That's what the image invites. That's what gives it depth and meaning.

In an earlier post on Metaphysical Journal, I spoke about my search for the silver world.


Every now and then, I catch a glipse of a silver world, out of the corner of my eye. When I look directly, it is gone. Sometimes my camera 'sees' before I do.

Not all photographs that 'say something' (in the way I would approve) depict the 'silver world', only some. So there's a conundrum.

It is too early. I am still not clear what it is I am trying to do. The only way I can get clear is by taking more photographs — lots more — and doing this.

Posted by Geoffrey Klempner at 10:06 AM No comments:

What am I after?

When I look at old contact sheets, going back 10 years, 20 years, 30 years, 40 years I see the same struggle, the same uncertainty. As contact sheets, they are undistinguished. And yet, every so often, a notable image appears, seemingly by accident.

You can only go so long without pressing the button. More often than not, at the very moment when you press, you know that this is nothing special. Hardly worth the film. So why bother? Because the alternative is freezing up. You have to keep moving, keep shooting.

Gary Winogrand left over 100,000 negatives. They weren't all great!

Yesterday, I used up a roll of Tri-X and came away with two images I liked: 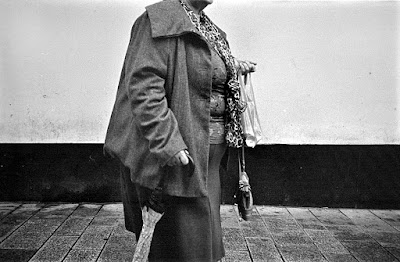 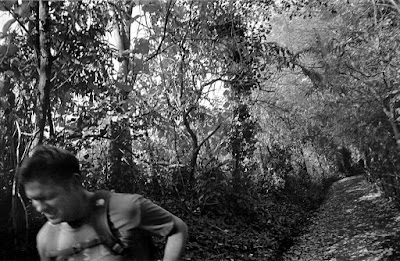 Just two of the many, myriad ways you can represent the human world without merely reporting on it. I could write a a few paragraphs explaining why I like these, but the purpose of this blog isn't to critique my own work — rather, to chart my progress and every so often hazard a guess where this might he heading.

Here, just for comparison, are two images from negatives exposed over 30 years ago. They could have been taken yesterday: 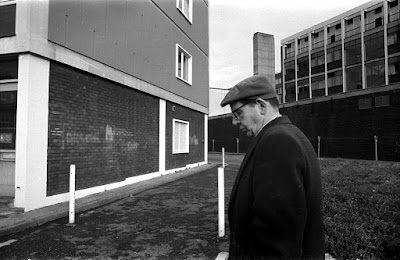 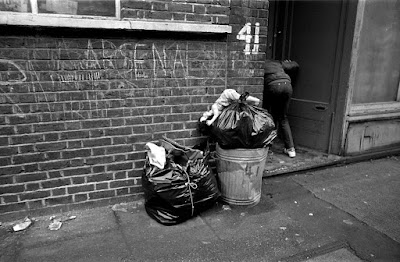 The second image would go well with the photographs I selected for my post on the The silver world. I wish I could find more of these.

Posted by Geoffrey Klempner at 4:19 PM No comments:

One of the things you do as a photographer — you stare.

You stare at a single point until you feel yourself beginning to disintegrate and disappear.

'The self of solipsism shrinks to a point of no extension, and there remains the reality co-ordinated with it' (Wittgenstein Tractatus). 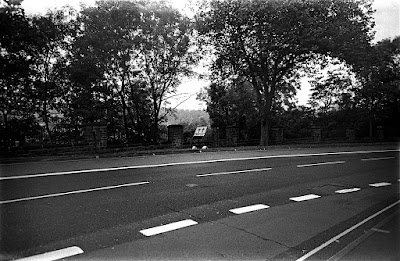 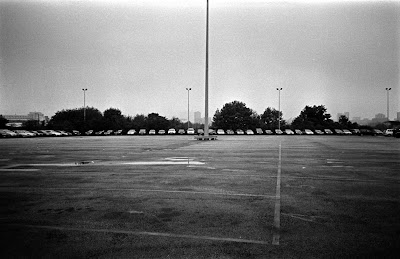 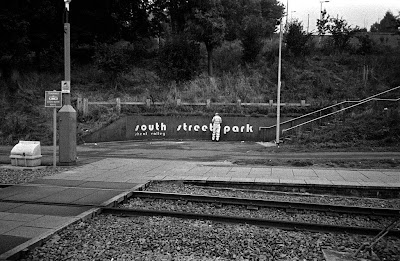 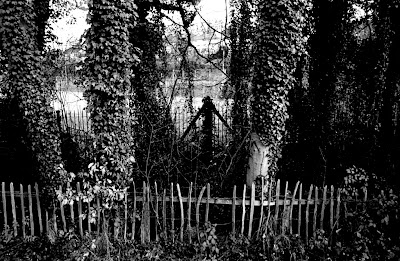 Maybe I was subliminally influenced by horror movies like 'The Ring' (2002) and 'Kill List' (2011). An image can have a healing effect. Like a mandala. It can also be toxic — even life threatening — in the hypnotic spell that it casts upon the viewer.

Why look for these images? What's the point? I am not looking for them. They catch me unawares. They pull me in.

Posted by Geoffrey Klempner at 9:44 AM No comments:

I am trying to see where this is going. It's what photographers do. You stare at your images, trying to see a pattern — or a point.

For me, it's about the Metaphysics of the Photograph, uncovering something hidden amongst ordinary appearances — but what? An appearance. Just like the others, and yet different, somehow. Something ordinary which acquires the attributes of the extraordinary.

Like Edward Weston's peppers. Except — as I noted in my talk — Weston is looking for, commenting upon, visual beauty whereas I am not. For me, it is more about making ordinary objects speak, giving them a voice. Human beings are just part of the landscape. It is the background, the context, that 'speaks'.

Taking a cue from the Lomography crowd, I've gravitated towards plastic 'point and shoot' cameras. It is easier to pass through the human landscape unnoticed. Every one is waving around an iPhone these days, taking 'selfies' or images of their latest purchase to upload on Facebook.

You can photograph anything that moves — or that stays still. My new philosophy. Don't think too hard about it. But then again, do take care. But quickly. Focusing takes too long, so autofocus takes care of that. Ditto light meter reading. An electric winder takes away the last bit of effort. Keep your finger poised over the shutter release. The only thing that matters is the frame. And you must look. 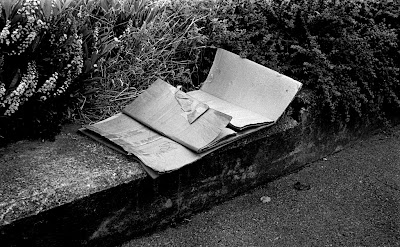 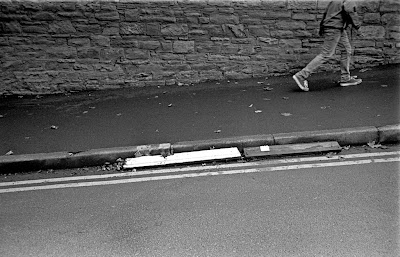 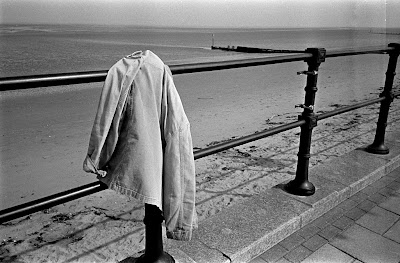 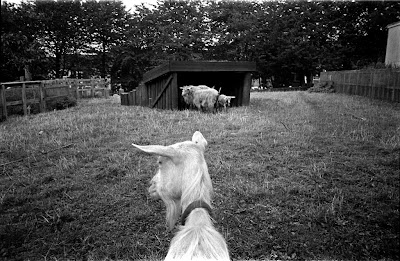 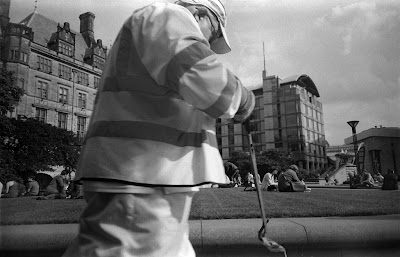 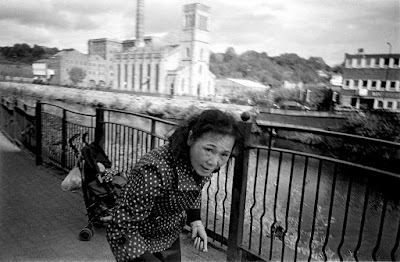 The last image disturbs me. Maybe a plastic cam gives the photographer too much power. The woman (she looks Vietnamese) was preoccupied with a misbehaving child, who doesn't appear in the photograph. I don't think she even noticed that I'd taken the shot (from the chest — no time to raise the camera to the eye). But it looks as if something is threatening her. The viewer is reminded of war photographs from the 60s/70s.

Posted by Geoffrey Klempner at 11:00 AM No comments: